IEX is "All-In"​ on Pricing Transparency

This article was originally posted on LinkedIn on February 1, 2019.

Earlier this week, in response to calls for more transparency from exchanges on the topic of market data fees, IEX published a report based on a months-long review of its own costs to produce market data and connectivity products and services. Our report also compared those costs, on a per user basis, to the fees charged by NYSE (ICE), Nasdaq, and Cboe (owner of the Bats markets). Because IEX, in order to run its own exchange, is required to pay for market data and connectivity at levels that are similar to what other industry firms must pay, we compared our per user cost to the fees we pay to the other exchanges. We concluded that these entrenched exchange groups are overcharging for market data at estimated markup levels up to 1,800%, and overcharging for connectivity with estimated markups exceeding 4,000%. You can read the report here.

How did the exchanges respond?

The exchanges answered our study with a detailed disclosure of their own costs and a thoughtful analysis of data and connectivity prices. Just kidding! Of course they didn’t do that. Instead, they predictably deflected from discussing market data cost burdens by fabricating something they call an “all-in” cost to trade.

Essentially, the way that exchanges calculate an “all-in” cost is by adding up all the fixed costs of the type we described in our study and combining them with variable transaction fees, which are heavily affected by rebates and pricing tiers provided to some of their members, to come up with an average cost per share. Why complain about the fixed costs, they seem to say. When you mash all the fees together, we’re actually a great bargain!

The problem — and it’s really a pretty obvious one — is that nobody pays an average. The fixed costs discussed in our report are needed regardless of how much any particular firm trades, much like a gym membership. The only way you could avoid them is if you avoid trading on all the exchanges that are part of one of the three major exchange families, and at that point you won’t have a trading business because regulations and commercial necessity preclude it. So, dividing these huge fixed costs by trading volume is about as realistic as Equinox saying that the average cost per gym membership is 9 cents per step on the treadmill. You are paying the entry fees regardless, so the exchange calculation is really just an exercise in taking a big number and trying to find a denominator that will make it look smaller.

What is the average cost to trade on an exchange?

Another big problem with exchanges quoting an “all-in” average cost is that it misrepresents the average experience of the members. In this version of exchange cost calculation, the transaction fees they charge (up to 0.3 cents per share, the maximum allowed by regulation) are reduced by the rebates and tiered volume discounts they give to some of their members, producing a smaller average cost per share traded. However, the distribution of fees and rebates is heavily skewed. How skewed? Well, as one of the exchange executives stated publicly last October, 5 out of that market’s top 10 brokers by volume received a net payment from the exchange even after considering all the connectivity and data fees they are charged. That revealing tidbit by itself gives us a very good idea that the actual “all-in” cost burden for the great majority of brokers is far in excess of the average per share. It’s hard to know exactly how much more because, of course, that is known only to the exchanges, and they are in no mood to provide that more illuminating information.

The Exchange Act of 1934 provides a simple statement of principle about how exchanges should treat their members and others who rely on them:

The rules of the exchange [must] provide for the equitable allocation of reasonable dues, fees, and other charges among its members and issuers and other persons using its facilities.

The rules of the exchange [must] provide for the equitable allocation of reasonable dues, fees, and other charges among its members and issuers and other persons using its facilities.

IEX’s model is to charge our members a flat fee per share and to provide market data and connectivity for free. We believe this method is equitable and reasonable, and it is fully transparent to all of our members. You pay IEX to trade and do not pay if you don’t.

To determine IEX’s “all-in” cost across our members, and in the spirit of further transparency, we conducted a study by ranking our broker members by amount of trading volume. We then bucketed them in groups of 5 (to protect individual members’ confidentiality). For each bucket, we divided the total fees paid by shares traded. This is what the results look like in graph form, with higher to lower volume groups shown from left to right: 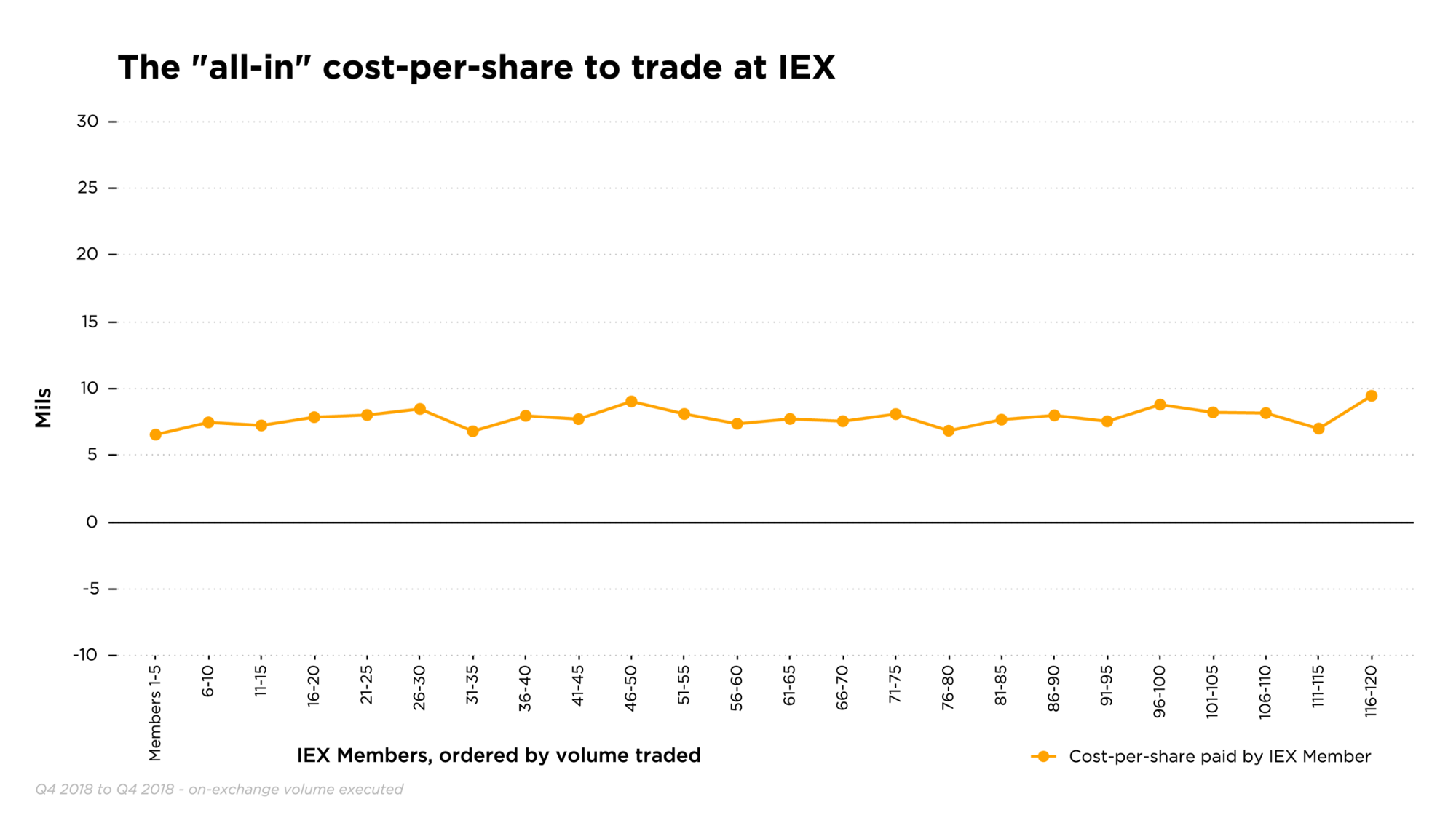 We don’t know, of course, what that figure looks like for the other exchanges, but we do know, for example, as confirmed in a recent blog post from Nasdaq, that fixed costs account for the lion’s share of “average” costs across all users. Based on the public information we do have, we think the curve for the maker-taker exchanges might look something like this: 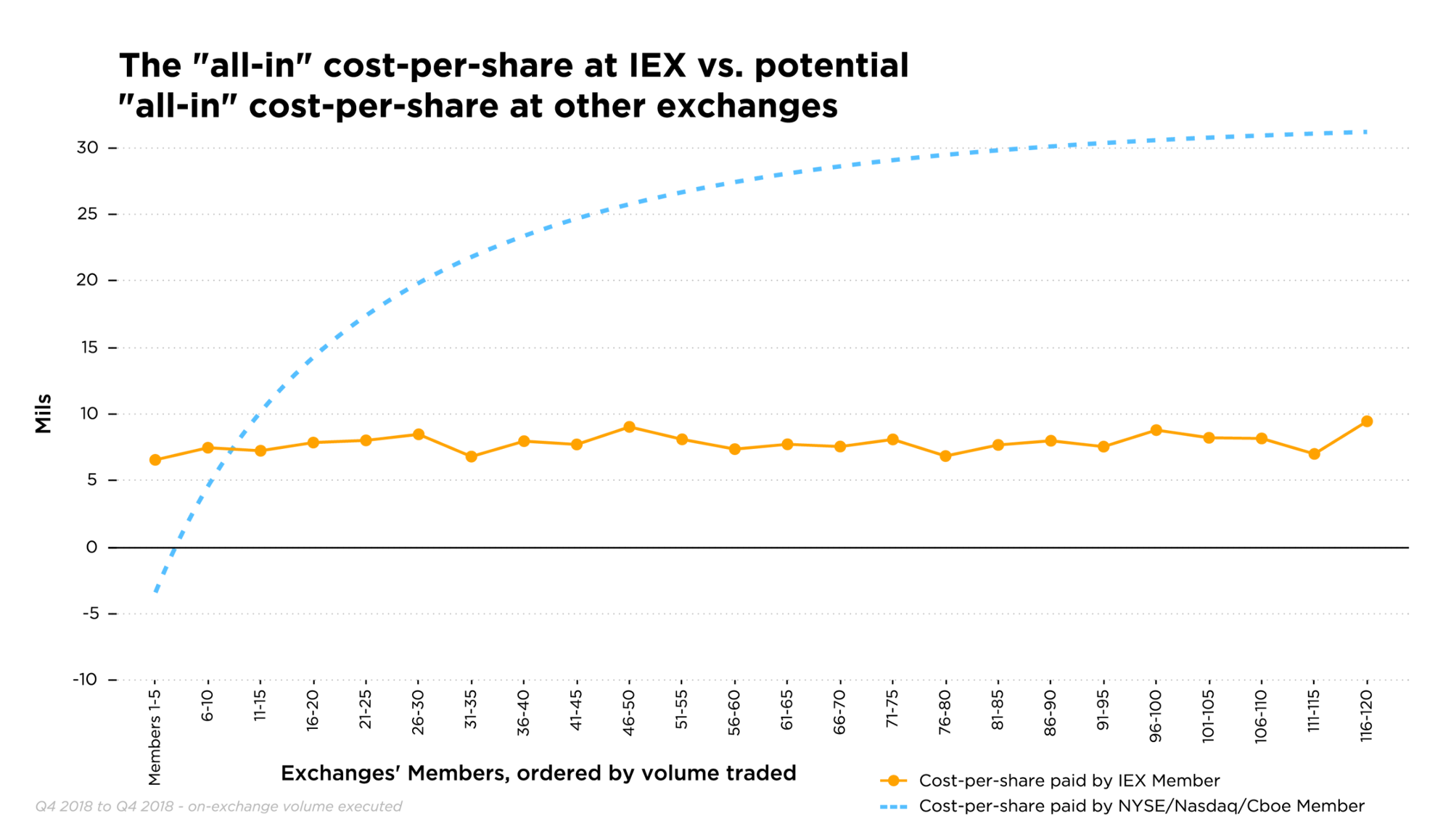 In case we got that wrong, and if the other exchanges are interested in real transparency about “all-in” costs, we would invite them to correct the record and provide data on how the exchange cost burden is allocated among all their members.

Where to go from here?

The exchange business is changing, and this week represented a large step forward in realigning the industry’s relationship with stock exchanges. Because of their privileged position, and regardless of their for-profit status, exchanges need to be held accountable for meeting the standards laid out in the Exchange Act. In major part, that means refocused attention on how to fix the unconstrained fixed fees that all members have to pay.

The simple conclusion is this: until the entrenched exchanges share the data behind their claims, anything they say to the contrary amounts to a public relations effort to get people to look the other way.